Despite the shift in commuting patterns, rail fares still increased by 2.6% at the start of this year. With workers planning to commute into the office less often in the future many are now house hunting in further flung locations and this is shifting people’s perceptions of the most attractive commuter destinations as national lockdowns ease.

Instinctif Partners analysed house price growth, train reliability and speed of journey, to reveal the top commuter hotspots for 2021. This year, the research factored in train crowding for the first time, as social distancing is likely to remain common practice. Longer journey times of up to 90 minutes have also been factored into the overall best commuter locations for the first time, and a separate ranking, which exclusively considers further flung locations, has also been created to accommodate the growing trend to move further out from city centres.

Folkestone in Kent was named as the ‘number one’ overall best commuter location into London, followed by Weybridge in Surrey. Luton has fallen to fourth place in the analysis after ranking as the top commuter hotspot for two consecutive years (2018 & 2019).

Despite the cost of an annual train ticket to London with a Zone 1-6 travel card being one of the highest across all areas analysed, at £6,508, Folkestone took the crown thanks to the area’s average property price of just £277,927 and strong rail performance rating, combined with a low average interval between trains.

Tim Firth, Director at the Weybridge branch commented: “Traditional commuter belt towns, including Weybridge, have experienced unprecedented demand for housing since the market reopened in May last year. Buyers who had moved out of London did so for more space to work from home, and private outdoor space - these two trends are likely to stay for the long-term. The pandemic has changed buyer-mentality. Proximity to the City/office used to be at the forefront of buyers’ minds. Now, it has become more desirable and feasible to live a greener area which facilities a better lifestyle, with commuting to the office less often." 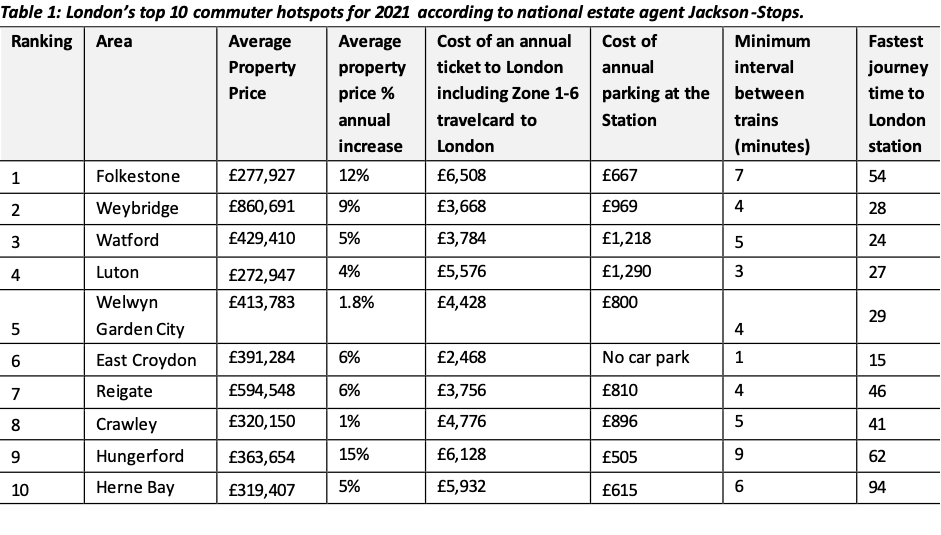