Our chairman Nick Leeming provides his views on Jackson-Stops’ and housebuilder Crest Nicholson Regeneration’s combined research which analysed the views of more than 2,000 UK adults to unveil the most sought-after community and new home features for prospective buyers.

Despite the continuous disturbance within the political sphere, the property market is bouncing back as buyers start to realise that now is as good a time as any to make a move. However, we are finding that they are becoming far more particular than ever before about not only the home in which they are looking to buy, but also its surroundings – from their neighbours to the amount of green space and infrastructure accessible from their doorstep. In this current climate, they want to be certain in their decision and if a property doesn’t meet their expectations it’s a ‘no deal’ from them.

The research revealed that sustainability is a key factor for home buyers with the majority (92%) of respondents saying a community that is sustainable is important when determining where to live.

Quality infrastructure plays a leading role in building sustainable communities and is a top priority for people when determining where to purchase a new home. Amenities such as local shops and businesses (98%), green space and parks (96%) and walking paths (92%) are the most sought-after community assets for Britons. These assets are so crucial to homebuying decisions that half (50%) of those surveyed stated that they would be willing to postpone moving into their home if it meant that all the supporting infrastructure such as businesses, shops, amenities and schools were in place. 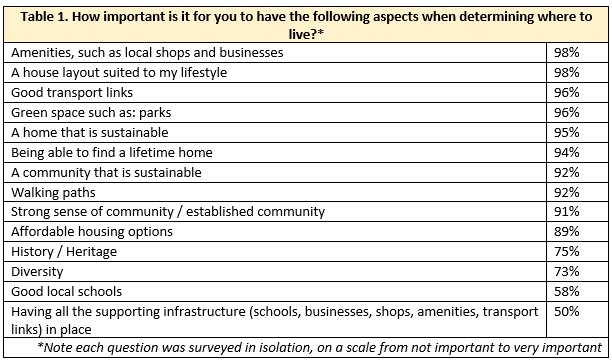 Home buyers also value intangible assets with nine in ten looking for a strong sense of community (91%), and three quarters (75%) regarding a strong link to the history and heritage of the area as important. Planning can also go a long way towards satisfying home buyers with 73% stating that a diverse community is high on their checklist.

In comparison, two in five (41%) parents with children under 18 years old prioritise living near an Ofsted rated ‘good’ or ‘outstanding’ school in their next home move. Interestingly, only 6% said that it would be crucial that their next home was located in a ‘desired’ postcode district, which, much like homes in close proximity to ‘outstanding’ rated schools, can achieve significant price premiums.

The research shows that 95% of UK house hunters want a home that is sustainable in terms of its features. More than two in five (43%) of the UK adults surveyed cited private outdoor space as their top priority, while a fifth (20%) would most like to see either energy efficient features or electric car charging points installed in or near to their home. 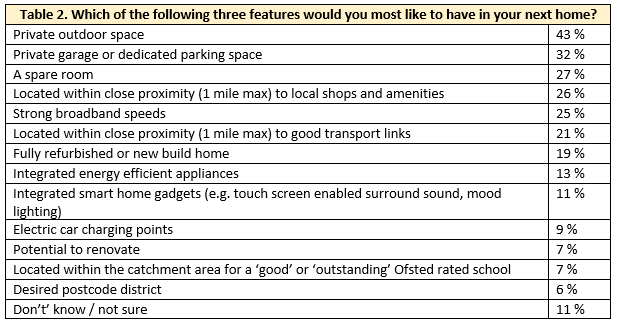 Interestingly, almost seven in ten (68%) people are looking for their ‘forever home’, a property in which they will grow old, when they buy their next property, so it should come as no surprise that the layout of their home is of importance to almost all respondents (98%).

When asked what they would do with a spare room, Brits are exposed as practical homeowners, with over a fifth (22%) looking to use it as a guest bedroom, while 17% would like to use the room as an office, in line with the rising trend of professionals choosing to work from home. Homeowners do also like to use their spare room for more creative or physical purposes however, with more than a quarter (26%) stating that they would transform their spare room into either a games room, gym, yoga or meditation space, cinema room, bar area or a crafts room.